Stage IV Snapshot: Why get a PICC or a Port

These are my arms after a week in hospital without a PICC or Port. Oh, how I missed them!

Perhaps I'll get one before my next treatment. 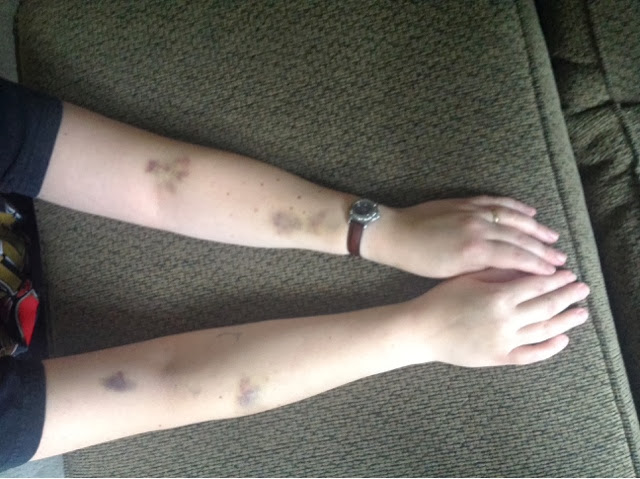 A Guest post from Geoff on my Hospital Stay

I have been a little quiet again. First, I spent a week at my brother's helping out after his wife had major cancer surgery. I came home on the train with nothing worse than swollen ankles. Then all hell broke loose. I will let Geoff tell the story, because I was in no position to. Here is a very scary story do infection gone bad. Surprisingly, this could be the way I go out from cancer, but not yet.

A couple of weeks ago, on a Saturday evening, Kate and her mom returned from a trip.  I picked them up at the train station and both were tired, but in good spirits.  Sunday morning, Kate started feeling a little under the weather - vomiting, chills and coughing.  By Wednesday evening, she was delirious, incoherent and clearly hypoxic with blue-tinged lips and eyelids.  She had brought our ten-year-old daughter to bed and fallen asleep beside her.  I woke her up and we moved to the adjacent bedroom, where I tried speaking with her.  She was make absolutely no sense and was having trouble answering simple arithmetic questions.  Then she realized she had taken a double dose of the medication she is taking for issues related to her cancer, including an opiate for pain.

I was very concerned, and Lena was terrified despite Kate's slurred assurances that she would be fine.  Finally, Lena and I insisted on taking her to the hospital.  When we arrived we went directly to ER nurse's station.  I could sense a bit of hostility from the triage nurse and could imagine her thinking "They came to the ER for a cold?".  The nurse took Kate's vitals and I could see the concern sweep over her face - her heart was racing, her blood pressure was very low and her oxygen saturation was at a scary 75%.  She told us that Kate likely had an infection that had gone septic (entered her bloodstream).  Seeing how terrified Lena was, she suggested we stay in the waiting room while Kate was brought back to be hooked up to oxygen and fluids.  Once that was done, Kate would look a bit better and hopefully be more lucid.  Then I could bring Lena back to see her mom in a better state and that would calm her down.  This was the first of many acts of kindness we would experience that night.

Indeed, we brought Lena back and she kissed her mom and had a few words with her and she heard the doctor, Dr. Caytak, tell me that Kate had pneumonia that likely went septic but that she was being treated with powerful antibiotics and fluids and would be fine.  Eventually, the nurses and doctors convinced me to take our daughter to my in-laws, which I did.

When I returned to the hospital about an hour later, I walked into Kate's room and she seemed to be sleeping fitfully.  A few minutes later, a doctor from Medical Oncology came in wanting to examine her.  He tried waking her up, first calling her name, then gently shaking her.  She would not awaken.  The doctor became more insistent:  yelling in her ear, shaking her vigourously, jabbing her sharply in her feet with his pen and pressing very hard on her finger nail with his pen and finally shining his penlight into her eyes.  He told me:  "This is very concerning" and rushed out to consult with the ER doctor.  Dr. Caytak showed up, staying in the doorway looking from Kate to the monitor that was tracking her vital signs.   Then all hell broke loose.

The doctor yelled, "She's going into respiratory collapse!" and he called to an orderly to come bring her to the Resuscitation Area.  The orderly sauntered toward the room and the doctor yelled "Hurry!  Hurry!"  The orderly ran in and rushed her down the hall towards resuscitation and every doctor and nurse on the floor exited right behind them.

"Hysterical" isn't a very flattering word to describe someone's state of mind, but that's exactly what I was.  In that moment I thought my wife was going to die.  I was sobbing and begging for her to live, for the doctors and nurses to save her life.  I couldn't get my head around being without her.  I couldn't imagine how I would tell our beautiful, sweet little girl, who just an hour earlier heard the doctor say "She'll be fine", that her mommy passed away.

A nurse named Dan came out and started to try to talk me down, explaining that they were getting ready to intubate her and put her on a respirator and that she was surrounded by a very professional team that was well trained and equipped to deal with the situation.  He spent maybe five minutes with me, but I'll never forget him and the enormous gratitude I felt for him giving me that faint bit of hope.

Several minutes later, the medical oncologist, Dr. Holmes, I believe, came out to say that as they were preparing to intubate her, Kate awoke from her slumber (wondering, she would later tell me, what the hell was going on and why was everyone standing around her like that) and was talking.  I was able to see her, still sobbing, and eventually they returned her to her room.

I don't remember who explained to me what had happened or when they told me, but here's the story:  When Dr. Caytak returned with Dr. Holmes to Kate's room and witnessed his failed attempts to arouse her from her sleep he saw that her blood pressure and respiratory rate were dropping - essentially they feared she was about to stop being able to breath on her own.  They explained that her septic infection lowered her blood pressure and respiratory rates to an already low level.  Then someone realized that among the drugs she had doubled up on in her delirium was a long-lasting opiate called dilauded and when that started kicking in, her vitals started declining even more.  Once they realized this, they were able to counteract the effects with an anti-narcotic medication called Narcan and her vital signs stabilized.

The next several hours were very stressful:  her blood pressure and respiratory rate remained low and here heart rate fast, but they were stable and eventually began to improve. Kate was eventually moved to a part of the hospital called the Acute Monitoring Area, where her vital signs could be monitored continuously.  After a day or so there, she was released to the General Medicine ward and was eventually released the Saturday after we first took her to the hospital.  Unfortunately, the day after she was released, she was feeling worse and had to be readmitted.  Finally, just yesterday, eight days after we rushed her to the hospital, she was again discharged, hopefully for good this time.  Though her recovery from the pneumonia will likely be long, she is feeling much better than she did even two days ago.

As an added bonus, now that she's home again, she can work on all the dishes and laundry that have piled up for the last eight days.

So many people to thank.  I was really impressed by the care Kate and I got at the hospital.  I don't know the name of the triage nurse who saw her first, but she along with the Nurse-in-Charge, Bonnie, got Kate in to see a doctor right away and showed tremendous compassion towards one very scared little girl.  I cannot say enough about Drs. Caytak of the ER, Holmes of Medical Oncology, Sun of General Medicine.  Kate's nurse that first night in Emergent Care, Anny, was just the type of person who should be in health care:  professional, empathetic and very, very kind and just a quality human being.  I really can't thank her enough.  Also, Dan, who I talk about above, who had to deal with me at what had to be the scariest moment of my life.

Kate had the help of so many doctors, nurses, orderlies, respiratory therapists and physiotherapists over the next several days that I can't possibly mention them all here, but am grateful to everyone in Emergent Care, the Acute Monitoring Area, the General Medicine Ward and the Lung Disease Ward.  Also many thanks to all the doctors from Medical Oncology who treated her after she was admitted the second time, notably Dr. Foeschl and Dr. Condan.

Finally, I can't thank enough all the friends and family who visited Kate or called or encouraged her via Facebook and for supporting me and Lena.