Where has the time gone? I don't even have an excuse for not posting since October. Well, a little excuse. I was scared to face the truth.

Like I mentioned in June, my breast lump grew back. Since then, we have been talking a lot about it, considering options. Initially my oncologist suggested that if the lump was problematic, the options were surgery and radiation. I saw my radiation oncologist in the fall. She wasn't inclined to radiate the breast unless it was causing a lot of pain. I had pain, but intermittently, and mild. Later in the fall, one of the physicians who supports the oncologist felt the lump and suddenly, a chemo trial was on the table. It was a trial with Xeloda and either Tykerb or a new anti-Her-2 drug. I will admit the prospect of chemo surprised and scared me. I didn't expect that, since I've felt quite positive about my experience with Taxol at the beginning of my treatment. Taxol and Herceptin was my first line of treatment. After a year of that, I took a short break and then started Tamoxifen with Herceptin. The Xeloda trial required two previous lines of treatment, I learned that only chemo counts as a line of treatment in the trial world, so I was ineligible. Tamoxifen didn't count.
The physician ordered another round of scans. I did a bone scan and the results showed stability in my bone mets. I was starting to think the breast mass was simply necrotic (dead) tissue. I wanted a biopsy before stating a new treatment. Then we got the CT scan results. Not only had the breast lump returned, it was continuing to grow. And, there was a second breast tumour I hadn't noticed. And there was some thickening in the abdomen that could represent new small tumours. And there is a mass next to my uterus. Chemo it is!
Ten days ago, I started Vinorelbine, with Herceptin. Clearly systemic treatment is required. Vinorelbine, which I like to call vanilla bean, is known to have milder side effects than chemos like Taxol, for example. So far, I've had some indigestion and constipation. So far, my hair hasn't gone anywhere, but it is too soon to tell if I'll lose it. I pray that the vanilla bean will be effective, with few side effects. I could use your prayers as well.
I will be in Vinorelbine for as long as it works and I can tolerate it. An ultrasound is being scheduled to investigate the uterine mass. And, I hope, I will get back to blogging, both here and on my family history blog. It has been too long between posts. Glad to be back.
Posted by Jim's Girl at 7:02:00 pm 29 comments:

Part of everyday life with bone mets is never knowing when a fracture is around the corner. I would have thought, at this time of year, my biggest risk would be slipping on the ice and breaking my hip. The actual culprit: 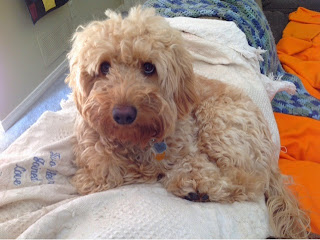 Yup, the dog. I was in bed yesterday when Mango came up and stood her front paws on my chest. A few hours later I noticed the pain. The good news is that the pain only lasts a few days. Ribs heal quickly enough. I know this because this isn't the first broken rib I've had since cancer came into my life, the last break was around Christmas. At the time, I blamed it on exertion while carrying the Kitchen Aid mixer up from the basement to make cookies.

This is life with Stage IV. Cookies, puppy kisses. Each risks a broken bone.